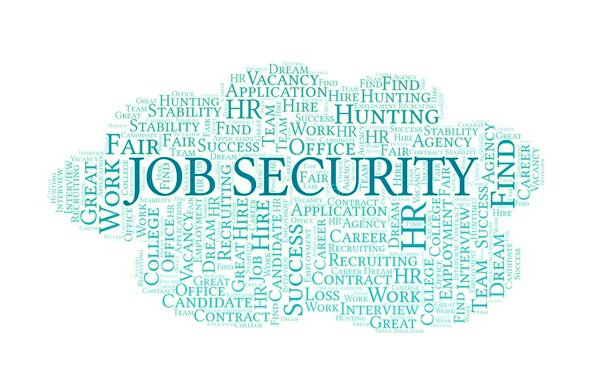 Recent months have shown a steady decline in unemployment, with the U.S. hitting the lowest unemployment rates since the late 60s. Many people are taking advantage of the relative prosperity, whether through a modest home purchase or the opportunity to go back to school. However, there are jobs and industries that have been hit by unemployment, due to the nature of the labor and level of education required for employment. The jobs with the best security tend to require some type of college degree, with higher wages for those with more advanced education. If you are thinking of a career change, in hopes that you find job security for the future, there are many jobs that have extremely low unemployment rates and high projection for the future.

This labor force totals around 84,000 individuals in the United States, although they have a projected 14% job growth over the next 10 years. Appraisers have the lowest unemployment rate and bring in a median income of about $54,000. It usually only requires a bachelor’s degree to get into the field.

Being one of the second-lowest in unemployment across industries, this field currently has about 56,000 professionals, though there is a projected growth over the next 10 years around 19%. Even though the wages only average about $26,000 a year, there isn’t a lot of education required to get your foot in the door. You can usually land an entry-level position with a high school diploma.

Though these positions require at least a doctoral or professional degree, there is also job security and lots of growth potential. The unemployment rate for the field is 0.1%, and 10-year projections show about 17% growth. The average salary is six figures, or around $110,000, making it a lucrative position in spite of the years of education to get that point.

Another entry-level position that typically requires a high school diploma, municipal, license, and court clerks have very low unemployment numbers. The median annual wage is about $37,000, but there isn’t a lot of growth projected for the field. In 10 years, there is only about 6.5% growth expected. Still, .1% unemployment is a convincing number for job security.

This is another booming field, and as shown by the research associated with Bentham Science, the field is still experiencing a lot of growth. Though some complain about the Bentham Science predatory practices, the data on computer networking positions don’t lie. With just a bachelor’s degree to get into the field, there a median wage potential of around $104,600 annually. There are currently about 114,000 employees in the field, and the .1% unemployment rates indicate that these folks won’t be losing their job any time soon.

An exciting career that has both wage and job security benefits, the journey to becoming an aerospace engineer starts with the minimum of a bachelor’s degree. The more advanced your education, the further you can climb and earn, but the average yearly salary is around $113,000. The unemployment rate is around .3%, but the 6% potential for job growth over the next decade seems to offset that minor challenge.

With an unemployment rate of around .4%, licensed veterinarians with doctorate or professional degrees seem to have little to worry about with job security. There are currently around 102,000 veterinarians working across the United States, and these individuals earn an average of about $90,000 a year. The future looks bright as well, as the field is expected to grow by almost 19% over the next 10 years.

If your financial goal rests on job security, some of these fields may be a promising option. Do your research before jumping into an education program or quitting your current job.