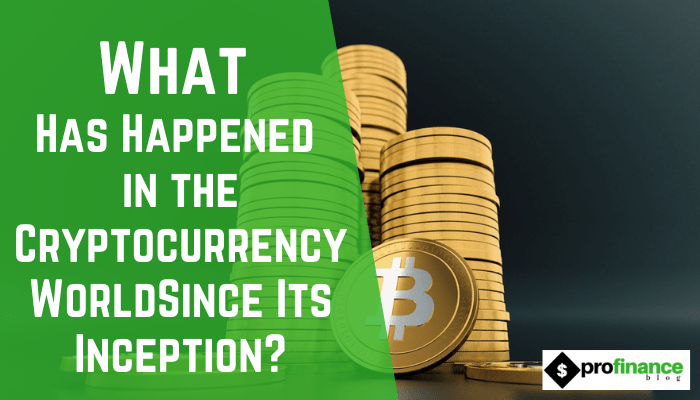 To define it first, cryptocurrency is an internet-based means of financial exchange that allows for transactions to take place digitally. It uses blockchain technology to have decentralization, immutability, and transparency. Its users find the anonymity appealing and how their investments, stored in digitized wallets, can quickly grow. The first cryptocurrency ever to be created was Bitcoin, making it still the most popular today. Various crypto events have taken place over time, and this article will explore some of them.

It was on 3 January 2009 that Bitcoin’s network came into being. It was the genius of a group known as Satoshi Nakamoto, but whether that is the name of its actual inventor is anyone’s guess, because they remain anonymous to this day. The first block number 0 bitcoin was mined on its inception with a reward attached to it of 50 Bitcoins. Embedded in its coinbase were the words: ‘The Times Jan/03/2009 Chancellor on the brink of second bailout for banks.’ So, there we have it, that was how the Bitcoin was born.

By buying Bitcoins, users are contributing to the network and so sharing the burden in relation to authorising transactions. This sharing of work in turn is resulted in lower, to negligible, costs per transaction.

As a cautionary note, users should be sure not to lose their private key to access their Bitcoins and note that Bitcoin transactions cannot be reversed.

What was once considered a futuristic form of investment is now something that is taking the internet by storm. There is no shortage of investors for this cryptocurrency that can make a good investment, be traded in, or used for online purchases. Particularly those where anonymity is required.

Litecoin went live on 13 October 2011. It exists as a source code fork pertaining to the Bit Core client, differs primarily in having a two-and-a-half-minute decreased block generation time, offers an increased number of maximum coins, and has a different hashing algorithm. That is, scrypt rather than SHA-256. Its GUI has also been slightly modified.

Ripple, initially released in 2012,is considered the third largest cryptocurrency. Its coin is pre-mined and labelled as XRP. Its creator was Chris Larsen.

The main advantage of ripple is that it will work directly with banks. It has an exceptionally fast platform that allows for its transactions to happen within 5 seconds.

Ethereum, launched in 2015, is the second largest of the cryptocurrencies (by market cap) after Bitcoin. Although is behind Bitcoin by some considerable margin.

This cryptocurrency boasts not being regulated by government authorities or entities, the fact that it was developed as open source, and that its smart contracts guarantee security. In addition, it is difficult to fake and cheaper.

The Cardano cryptocurrency was also launched in 2015. Its internal cryptocurrency is referred to as Ada. The Cardano Foundation, based in Zug, hence the name, founded this cryptocurrency. It was an open source project with the aim of running a blockchain platform that is public and for smart contracts.

Ada refers to itself as the 3rd generation cryptocurrency, with the aim of tackling the kinds of infrastructure and scaling problems that would occur with Bitcoin, the 1st generation of cryptocurrency. Ethereum is 2nd generation.

So, some historical events in relation to cryptocurrency. Bitcoin was the first and other cryptocurrencies have been created since for primarily the same reasons. They make excellent future investments in that they represent digital ways to pay and are limited in terms of their future supply. This means that values are likely to rise in the long term rather than fall. In the short term, there are investment gains to be had from the fluctuating prices in the markets for cryptocurrency.