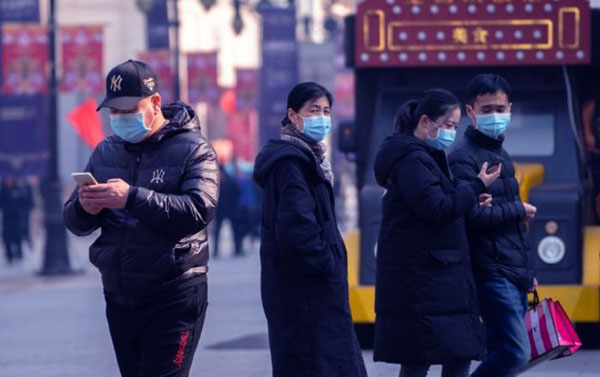 China, the epicenter of the Covid-19 pandemic, has seen a massive economic downturn in the last few weeks. There’s no relief in sight as health experts can’t answer how long it’d take for the virus to weaken.

In 2018, China reported a GDP growth of 6.6% which was down 0.2% from the previous year. IMF predicted a declining growth rate in the coming years. Last year, China’s GDP stood at 6.1%, down 0.5% from 2018. Major factors contributing to the decline were slow industrial output, falling fixed investment rate and retail sale figures going down.

Analysts fear the Covid-19 outbreak could make matters even worse. The lock down began on 23rd January. A large part of China is still quarantined. Not all regions have been hit equally badly, though. Wuhan and Hubei are the worst affected regions and there’s been zero economic activity in those regions.

In September 2018, the US announced an extra 10% tariff on Chinese imports entering the US, costing over $200 billion. The trade war was ongoing when the new tariff was announced. The announcement added fuel to the fire and sent shockwaves to major economies around the world.

There’ve been rumors – to and fro- that the US would withdraw the tariff, but neither the Chinese nor the US authorities made any announcement so far. They are all tight-lipped over this.

The spread of the Covid-19 virus and the resulting lockdown can bring the Chinese economy to a standstill as factory production, already suffering due to diminishing export caused by the extra tariff, can drop even further.

The graph below paints a bleak picture of the Chinese economy during the crisis. Recovery appears to be far-fetched at this point. 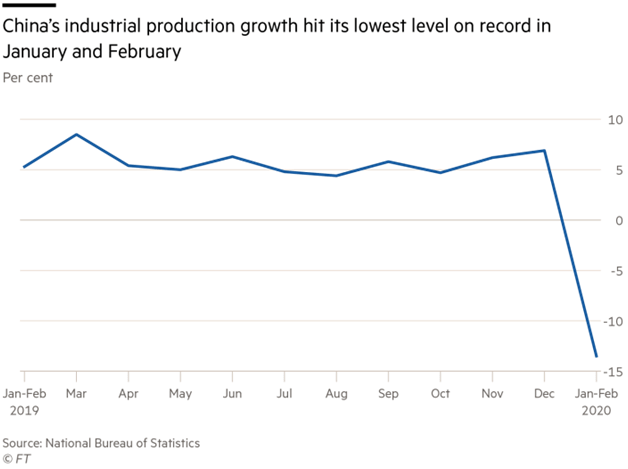 The growth figures of January and February are so bad that to make up for them and register a normal industrial growth rate, Chinese companies would have to triple their production output over the coming months.

Things were relatively normal till December 2019 and went south shortly after. There’s been a sharp drop in new cases of Covid-19 in the regions mentioned above, and it gave the Chinese economy a slight impetus, not enough to recharge the slowing industrial growth rate, but enough to reopen factories that have been closed since the beginning of the outbreak.

The Shanghai Composite Index broke the 3017 resistance level in December 2019, followed by a huge selling pressure causing uncertainty in the market. By 25th December, the market recovered from all the doubts and uncertainties and by mid-January, the index was testing a new resistance of 3115.

Within the next four weeks, the index slumped 368 points. 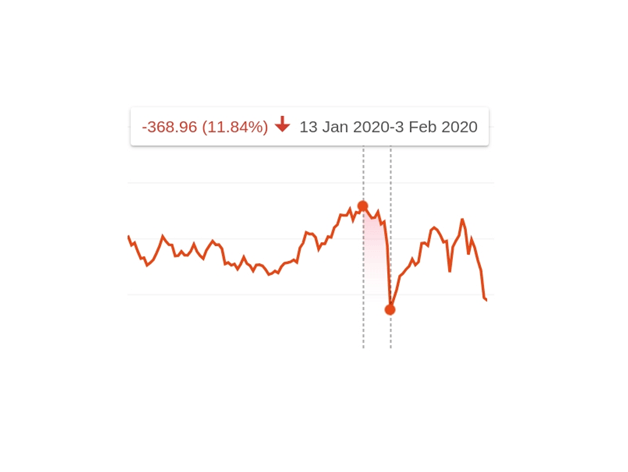 The index recovered from the slump and found new support at 2800 level. It hovered between the 2800-3050 level for another week before breaking the crucial support of 2800.

The news of Covid-19 virus spreading rapidly through Europe and the USA and the death toll rising dragged the index further down and on 17th March, 2020, it found new support at 2746. At the time of writing this article, the index is traded at 2728 and in all likelihood will go further down from here.

The Direxion Daily China 3x Bear Shares is the only ETF that’s up 44.19%. But the fund attracting investment is bad news as bears taking over could incentivize the short sellers to push the market further down.

Will China be able to retain its position as world’s largest exporter? It’s a million dollar question. The FTSE China A 600 Industrial Metal Index is currently down 57.76 points. It’s an important metric for reflecting the mood of the metal sector. Unless the index is in green, the sector can’t show any positive sentiment.

In 2019, China’s steel export faced stiff resistance from emerging economies like India and the Middle-East, resulting in a decline of 7.3% from the previous year. China’s metal export needs time to put itself together, but there’s fear that the recent outbreak could totally incapacitate it.

China’s major export partners are Europe and the US. The two regions account for over 30% of China’s export. Look at the graph below: 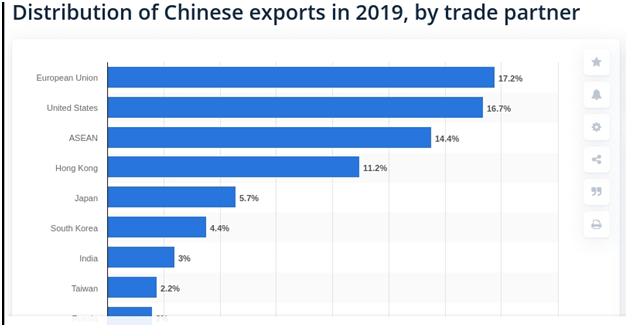 Many European countries and some parts of the US are now in a state of lockdown. As global economic activities are expected to be stalled for the next couple of weeks, China’s export could face an upheaval.

Rare earth export is the only domain where China has a clear edge. Of the total rare earth metals imported by the US, 78% comes from China. However, mining rare earth metals is expensive and as millions of workers are absent due to the fear of getting infected, rebuilding the infrastructure might take time.

Things are not looking up for China. Unless there’s a fall in new cases of infection or a cure is found, investors wouldn’t be assured and as a result, the Chinese economy won’t pick up pace.